Save some cash, pick up one of our awesome ex-demo specials!

These skis are used, ex-demos from past seasons.

Our ex-demo selection is in good to great condition with varying degrees of cosmetic wear and tear (skis are sold as pictured.)

Skis have been / will be fully tuned prior to shipping.

All ex-demo skis are sold with a one year warranty from TCB. 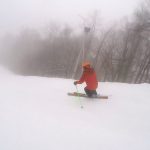 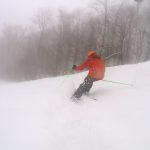 The iKonic 84 Ti is a brand new ski from K2 for the 2018 season and builds off of the success of the previous Konic skis. The new Konic series has an updated shape, more metal than previous versions, and greater control thanks to a exo-skeleton style structure underneath the bindings. K2 calls them the most high octane, corduroy ripping daily driver skis they have ever made. That statement is enough to get us excited, so we made sure to put the new skis to the test. After all, we were relatively impressed by the previous Konic collection and are thrilled when a manufacturer builds off an already successful design.

Justin Perry tested the 177 cm length and thought it was “an amazing carving ski.” Justin gave the iKonic 84 Ti 5 out of 5 for torsional stiffness and edge grip and honestly we expect to see that kind of reaction to a ski that’s marketed as a high performance carver. Justin found that it “held an edge on every condition; through ice and slop.” Although it is a full on, high end carving ski, there is a little more forgiveness than a narrower carving ski or a race-inspired non-FIS ski. Justin thought it “felt like a more forgiving GS ski,” which is pretty perfect for an all mountain carving ski. You don’t want it to be so stiff and demanding that it punishes mistakes, and if you do you can just buy a GS race ski.

Michael Rooney agreed with this idea, commenting that “this ski is good for a skier who wants real performance with a little forgiveness.” Michael found that you “can actually get back on the ski and still recover,” unlike one of the skis we touched on above that would buck you onto your side. He tested the 184 cm length and thought it was “good at making sweeping carving turns.” He also found that it “turns quickly and has some snap” when you ski it hard.

Benny Wax found it to be quick turning as well, but also thought it laid down some nice GS style turns at speed. Although it does have a 84 mm waist width, Benny thought the shape of the ski was best suited for firm snow to the point where he wouldn’t really want to take it off-piste. He tested the 170 cm ski and commented that the it wants to be “kept on the hardpack and groomers” where it has its best performance.

Steve Sulin thought the iKonic 84 Ti was “the K2 ski we’ve been waiting for.” He tested the 177 cm and scored it 5 out of 5 for stability, torsional stiffness, and overall impression, which are the scores we’d like to see for a high performance carving ski. He referred to it as “a ripper’s dream.” Steve has a lot of experience skiing high end carving skis, so we take his reaction very seriously. If Steve thinks it rips, it rips. He also commented on how easy the turn initiation felt, saying you could just “roll it on edge and hold on,” as the ski takes you straight into a powerful carving turn.

Alright, so we think K2 was telling the truth when they said this is the most ripping daily driver carving ski they’ve ever made. Skiers who spend most of their time on groomed slopes and like laying down powerful turns will love the iKonic 84 Ti. While its waist width suggests it can be skied in other terrain, which it can, it definitely shines on the groomers and is a bit more a handful off-piste. The 84 mm waist width does, however, give it that extra amount of stability for charging on different snow conditions. You won’t get bogged down on a relatively soft groomer, you can just keep on ripping.